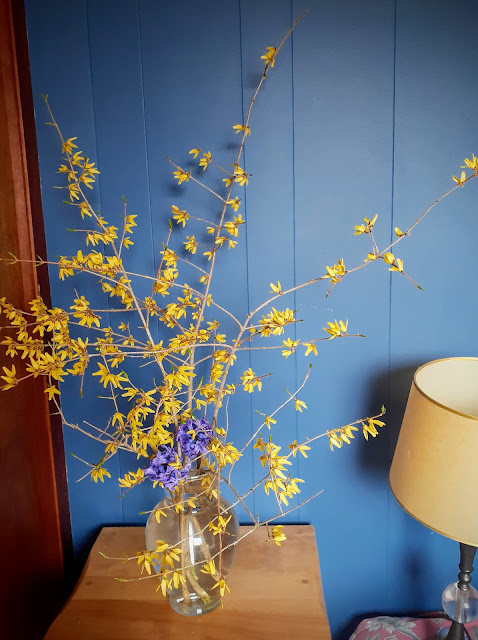 We have forsythia bushes in our garden.  The forsythia is a symbol of early spring with golden bell shaped flowers which collectively bloom, telling us that the dark and cold winter has gone!

Most species of forsythia originated from China (they are also used as Chinese medicine), but there are a few types which are indigenous to Europe. The forsythia blooms vivid yellow flowers before having the green shoots. Their golden fountain-like shape shiningly stands out of the monotone garden in early spring.

When I worked in my family’s flower shop I liked decorating forsythia in our customers' restaurants or shops. The colour of the flowers is so catchy and always gets people's attention. They have a strong vitality, but as cut flowers each flower only lasts a week even when it's not very warm in your room. They will make a mess after flowering on your table or floor, so you might want to choose the right place where you put them, otherwise it could be difficult to clean up.

Technique for prolonging the life of forsythias in a vase

The branches like forsythia are more difficult to treat after cutting compared to normal cut flowers because it’s not easy to let them suck water after getting them separated from the bush and it’s earth.

It’s better to put the branches in a vase which is filled up with water as soon as you cut them from the bushes. In order to let them suck water more effectively, you can give the branches big notches from the bottom (the part which you put in water). Or, you can peel their skins about 5 cm from the cut edge. The principle is that you want to expose their tubes under their hard skins to water and expand the branches' ability of absorbing water. 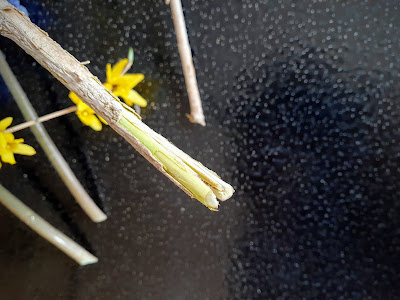 However, it is ironic that the flower may finish earlier when they can quickly drink water from the vase. Generally speaking, the flowers need lots of water, when they are blooming. The more water they get, the more flourish their flowers will be, but it also means the flowers may finish quickly.

Technique for controlling the angle of forsythia 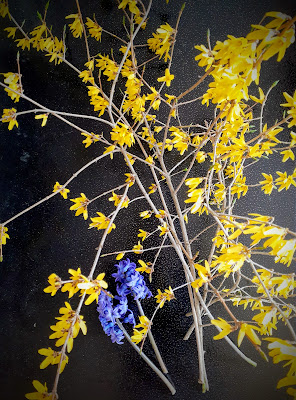 Forsythia’s branches spray out a lot and so it’s easy to arrange them in a flower vase. However, the flowers and branches face in various directions, here and there. If you try to control them too hard, you could get frustrated. I think it’s a good idea to let them be, just how they want to be. 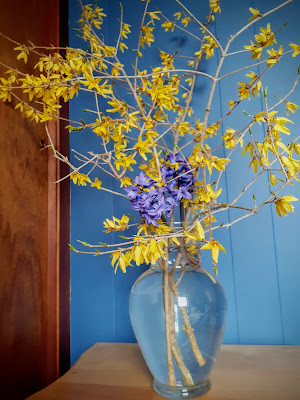 When you put a few branches in a flower vase which has a big opening, you might find it more difficult to make them stay in your favourite place in the vase with the angles that you prefer.

There are some techniques to keep them in the position where you want them to be. The photo below was taken last May. I used the rocks to hold the forsythia branches and daffodil stems --- you also can see how messy the forsythia could be. 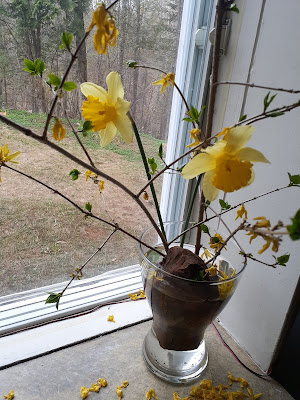 Beside using rocks, you can put chicken wire in your flower vase when you use a non-transparent vase to control the angle of the branches.

Decorating Forsythia and Hyacinths in a Flower Vase

Today, I cut the forsythia and hyacinths to put in a flower vase. The two hyacinths were lying down on the ground because of the strong wind. I put them in the vase and then placed them in the bathroom. 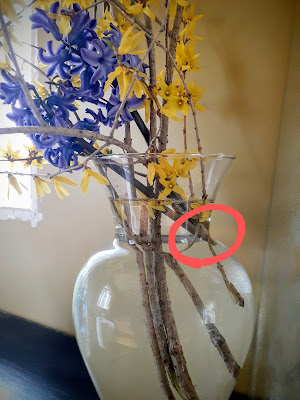 I put the hyacinths stem against the wall of the vase so that they can keep their position. The photo is taken from the side. You can see the hyacinths cut stem lean towards the vase and one of their flowers is held by one of the forsythia branches. 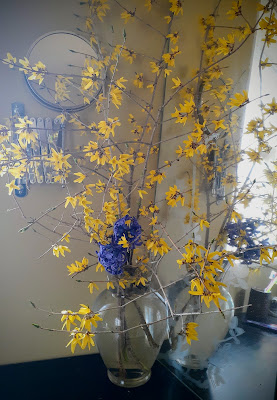 The hyacinths smell nice and the corner where I put the forsythia and hyacinths looks attractive now. Even though the weather forecast says that it might snow tomorrow, we are going to keep a little scent of early spring in our bathroom.

Next Post >>> Are we going back to the winter? A snowy garden, again!