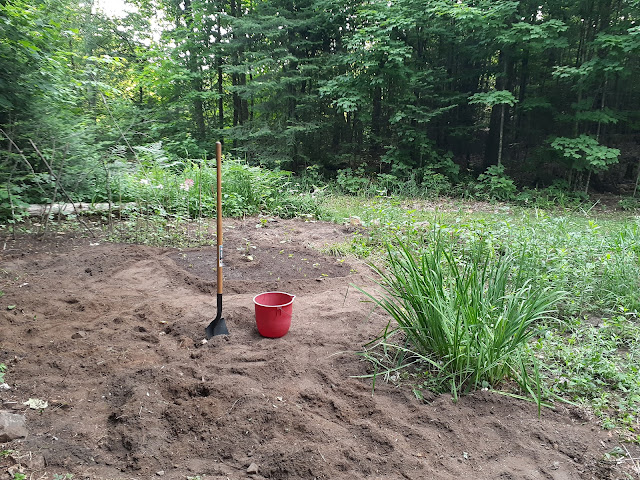 We have been expanding our vegetable garden and flower beds every year. This year, we've built a new raised bed and we're also cultivating the back garden.

The image above is from a few days ago.

Until last year this area was occupied by orange lilies. Last year we were so busy removing the lilies that we didn't have time to design the garden.

In addition to the lilies, there are many other weeds that have taken root in this area and we are in the process of removing them.

It's not as simple as pulling out the weeds from the vegetable patches and flowerbeds by hand because we also have to dig up roots which are spread 10-20 centimetres deep underground. Some of the roots are so thick and sturdy that they could be mistaken for electrical cables, and I sometimes have to fight with ones as thick as my thumb. It's real physical work.

I've been doing this work since early spring and in fact, I've lost some weight which had been added during the winter. 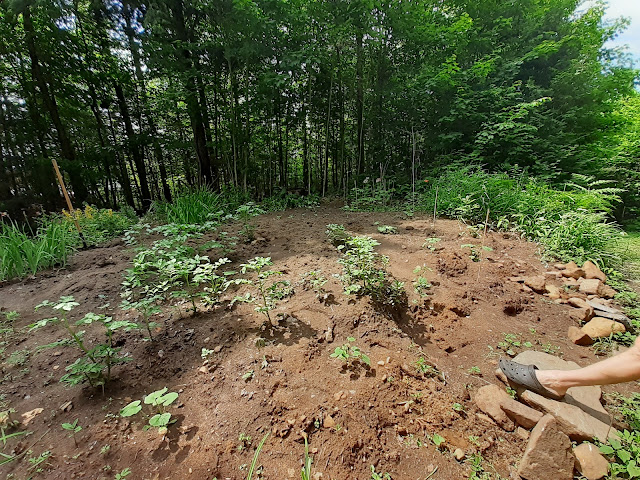 Since this was a longer weekend for us, we made good progress. We dug up the weeds and removed the big stones and rocks. By the way, we had to buy a new shovel this year because one of our shovels was broken because of this work.

We are removing the majority of the weeds, but we also want to keep some of the ones which flower so that we can attract pollinators. However, these useful weeds had taken over the sunniest areas so we transplanted them.

After removing the weeds and transplanting the other weeds we wanted to keep, there are still some potatoes left. These are not the ones we planted this year. They are the leftovers from last year's planting. The potatoes were originally from the supermarket and we planted last year because they had sprouted. We thought that we had a good harvest of potatoes last autumn but obviously we left a lot of potatoes behind in the ground.

Many websites tell you not to grow crops from supermarkets in your vegetable garden because you don't know what diseases they might have and it’s better to buy the seeds in the trustable shops. If you are concerned about it, please don't imitate me too much. For me, it is not a big issue because I don’t really trust the seed companies here either.

<<< Previous Post: Eddo had eyes, so we planted them